Most current machine learning methods require an input in the form of features, which means they cannot directly use a (knowledge) graph as input. For this reason, we aim to learn feature representations of entities and relations in the knowledge graph. This is called representation learning and the same idea is not just applied to graphs – but also images, (unstructured) texts, audio or video. Those representations are also called embeddings. Of course, the learned representations should not be arbitrary: ideally, they should allow downstream machine learning tasks to perform well. The image below shows how the nodes for Barrack and Michelle Obama are transformed to a 2-dimensional feature space (in practice the number of dimensions is much higher).

Knowledge graphs contain triples of the form (subject, predicate, object). The basic idea of most knowledge graph representation learning (KGRL) models is to learn representations, such that the feature representation of the subject transformed by a predicate or also called relation specific transformation results in the object representation. A drawback of most models is, however, that they often only support a single or few types of transformation. This directly affects which graph structure and semantics they can preserve. For example, in the TransE model all symmetric relations will (when only considering the transformation function) actually have embeddings whose latent feature vectors are close to 0 and all entities involved in symmetric relations will have very similar embeddings as a result. Trying to preserve as much structural and semantic aspects in the vector space in KGRL models is one of the main aims of our research.

Apart from the performance in practice, a nice thing is that we could also prove some formal properties. We could show that the model is fully expressive. A model is fully expressive if it can accurately separate existing and non-existing triples for an arbitrary KG. We could also show that the model is capable to infer several relational patterns, in particular role composition, inverse roles and symmetric roles. Inference here means that when the premise is true according to the score function of the model, then the conclusion is also true. Last, but not least, we could show that the model subsumes various state-of-the-art models. Subsumes here means that any scoring for an arbitrary KG of a model can be achieved by the more general model.

We worked on several aspects of KGRL models. For example, in a paper published at EMNLP 2020, we considered hyper-relational facts, i.e. knowledge graphs with further information on edges as shown below.  This is employed by some large-scale knowledge graphs like Wikidata and DBpedia. We used graph neural networks to work with such knowledge graphs. 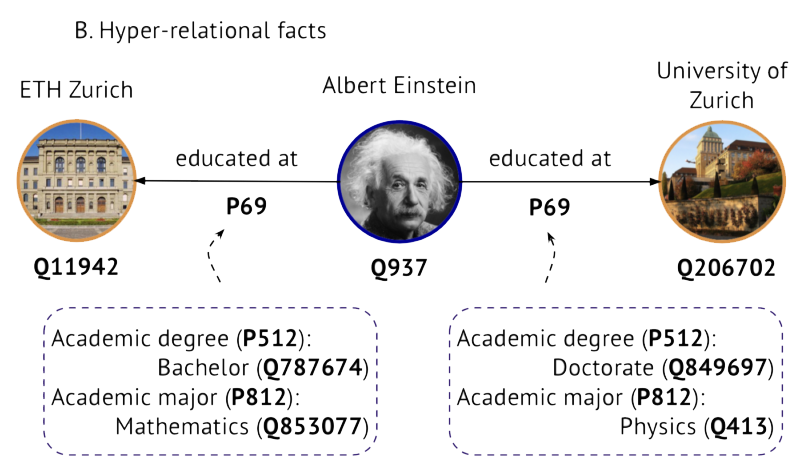 We also worked on the inclusion of numerical and temporal data and are continuously researching KGRL approaches in order to build a bridge between knowledge- and data-driven approaches in AI. We applied the work in biology and scholarly recommendations.

Apart from devising new approaches, one of the major hurdles in KGRL is that approaches are hard to compare against each other as subtle nuances in the loss functions, metrics and hyperparameters can have a bigger effect on the final results than the actual technical contributions of one particular paper. For this reason, we started the PyKEEN effort, which is meanwhile a community project that has received wide attention, e.g. is used by AstraZeneca. Via PyKEEN, we can directly compare approaches in particular settings in the same environment. We used this to create a large-scale reproducibility study.

It will be very interesting to see to what extend KGRL can be used to include domain-specific and expert information into systems trained on raw data. In particular, as mentioned above, a main question is how much structural and semantic information can be preserved in the embedding space. We have already seen that using different types of geometries can be useful in this regard and we may also explore other formalisms, such as differential equations, work in different settings, e.g. inductive approaches (where parts of the KG are unseen), and last but not least actually apply KGRL in downstream tasks that go beyond link prediction – for example for building intelligent dialogue systems.

Unveiling Relations in the Industry 4.0 Standards Landscape Based on Knowledge Graph Embeddings Inproceedings